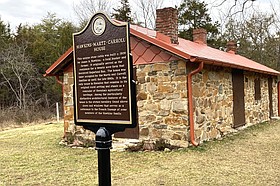 Runnymede Park, Hawkins/Carroll house: This unique stone cabin was built c. 1909 by James A. Hawkins, a local banker and farmer. It originally served as the residence for a twenty acre farm that bordered Sugarland Run. The house was later occupied by the Martz and Carroll families up until the late 1980s. It is the only house in Herndon that remains in its original rural setting and stands as a reminder of Herndon agricultural heritage. Among the particularly distinctive architectural features of the house is the etched heraldry found above doors and windows that serves as a reference to the French lineage of some members of the Hawkins family.