Actions and words by Fairfax County leadership and citizens 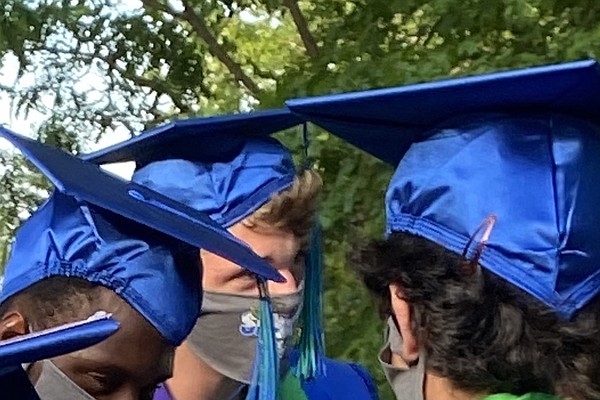 In our new series, County Highlights, the Connection spotlights actions and comments by Fairfax County officials, public servants, and local citizens who call the County's 406 square miles home. Interesting fact: If Fairfax County were a city, its population of 1.46 million residents would rank it as the 10th largest city in the United States.  The County has more residents than six states: Montana, Alaska, South Dakota, North Dakota, Delaware, Wyoming, and Vermont.

Fairfax County Board of Supervisors Meeting of March 9, 2021

Following five hours of public testimony on March 9 and action by the Fairfax County Planning Commission the week before,  the Fairfax County Board of Supervisors approved to defer its decision on the  Zoning Ordinance Modification (zMOD)  draft until March 23. Chairman Jeffrey C. McKay  (D-At-Large) said the Board postponed the decision "to make sure we get it right."

Among those testifying, Jeffrey Landon representing the Fairfax National Estates Homeowners Association in Centreville, said, "Do it honestly with full citizen participation. The scope of zMOD, from the scope of the project statement, does not appear to align with what has been tucked inside the several hundred-page document." Debbie Smith, Chair of the Mason District Council Board, expressed concern about the more substantive proposals in zMOD that could potentially impact single-family neighborhoods by removing public notice, engagement, and land use matters for Accessory Living Units (ALUs)  as well as home-based businesses. She said, "Sensitive ordinance changes like ALUs and home-based businesses should not be casually slipped into the massive zMOD project." Holly DePaul of Vienna said, "I'm against any regulation on the size, quantity, or content of flags flown."

Supervisor Pat Herrity (R-Springfield) said that he did not think in his 13 years on the Board, he had ever heard such opposition to proposed changes from as broad a group. "I certainly couldn't support what's on the table right now, either the Planning Commission or the staff recommendation," he said.   The zMOD advertised options for consideration can be found on the County website.

The Board approved the motion to  lease County-owned property to Sigora Solar, LLC to install, operate, and maintain solar photovoltaic panels for on-site electric generation on 22 County locations. It did not represent a complete list of the sites at which Sigora Solar will install solar facilities. Electricity costs for facilities at which PPA solar projects are installed are expected to decrease as soon as the panels are activated. Under its contract with Fairfax County, Sigora Solar offered a fixed rate of $0.069 per kWh delivered for a 25-year contract term. "This will help in our environmental sustainability and also save County funds on utility bills," said McKay.

The Board approved to authorize advertisement of a brief synopsis of the FY 2022 Budget and a real estate tax rate for FY 2022 of $1.15 per $100 of assessed value. “This represents no change from the current real estate tax rate,” said McKay. It was one cent higher though, than County Executive Bryan Hill's proposed budget plan for FY 2022.

“I think we should be doing what our struggling residents are doing, finding ways to work within our means,” said Herrity. The Board may lower any advertised tax rate, but higher tax rates cannot be imposed without advertising such rates.  The approval set the cap at $1.15.

Tax assessments in the County are rising, leading to a $224 increase in the average home. The Department of Taxation assesses tax bills based on the real estate market by analyzing sales of homes of comparable value in comparable neighborhoods.

The Board approved the County Executive's recommendation that the Board of Supervisors direct staff take action concerning Fairfax County's Calendar Year 2021 Forest Pest Management Program. Supervisor Dan Storck (D-Mount Vernon)  said, “It’s essential that we manage, not only pests that can impact and severely denude out forests, but also that we look overall at forestry management.”

The Board also approved the annual submission of the Disease Carrying Insect Program, including the continuation of the county-wide mosquito surveillance program, testing mosquitoes for West Nile virus (WNV), Zika virus, and other pathogens, larviciding of mosquito breeding areas, and aggressive community outreach and education program to increase County residents' awareness of mosquitoes, West Nile virus, Zika virus, and other mosquito-borne diseases, as well as personal protection and prevention methods.

The Board approved in a vote a letter conveying  Fairfax County Board of Supervisors’ Comments on WMATA’s FY 2022 Operating Budget and FY 2022-2027 Capital Improvement Program to WMATA. McKay said there were “a lot of troubling things in the budget proposal.” “You don’t get people back into the system by cutting service and closing stations.”

Supervisor  Walter Alcorn (D-Hunter Mill) said the proposal in Metro’s budget to shut down stations in January generated much attention and concern. “The impacts...would be just horrible for our residents and our businesses... Specific to the Silver Line...it would be doubling down on the pain again given that residents and folks that use the Dulles Toll Road are paying for and have been paying for several years the construction of that line.” Alcorn said he was optimistic that with federal help, that “terrible outcome” can be avoided.

Prom and Graduation for FCPS Seniors: In her newsletter to County students, families, and staff, School Board Member Rachna Sizemore Heizer (Member-at-Large) said she promised plans were being made for some form of in-person prom and graduation. “Exactly what it will look like depends on the Governor’s restrictions, but everyone is committed to at least giving you those two seminal events despite all you have lost,” Sizemore Heizer said.