Remediate, Demo then Build in Herndon 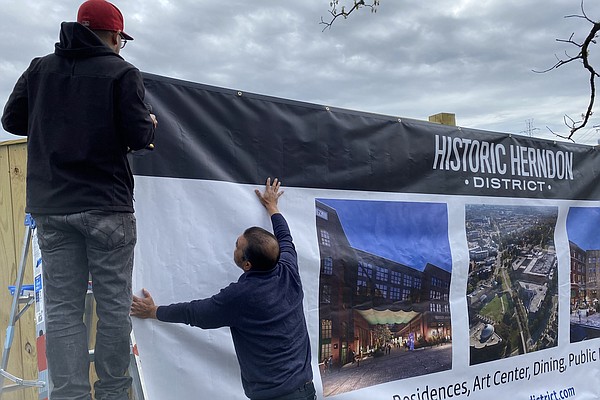 In the last few weeks, forward motion has been seen at the site. Workers attached a 43 x 8-foot, full-color graphic banner with the name Comstock to new fencing surrounding a portion of the planned redevelopment site where once an auto dealership had been located. According to the Town website, "Contractors will be on-site at the former Subaru dealership, 770 Elden Street. They will be removing asbestos, environmental remediation that is part of the Virginia Brownfield Remediation grant awarded by the Commonwealth to the Town of Herndon in 2017; and then demolishing the building on the site, in preparation for redevelopment by Comstock Herndon Venture LC."

Comstock, it appears, is moving forward in other actions as well. On a new website, www.historicherndondistrict.com, and Twitter page, #HistoricHerndon, the company named Next Realty Mid-Atlantic as its source for retail and residential leasing information. It tagged its project redefining Historic Herndon with three words "ride|live|discover." First, it keyed in on the location's signature public transportation options and pedestrian/bike-friendly access. The Historic Downtown District is in close access to the nearly completed Herndon Metrorail Station, part of Phase 2 of the Silver Line extension, Park and Ride Facilities, and Fairfax Connector bus routes as well as the bikeable W&OD Trail. This 45-mile paved trail runs through the urban heartland and into the Virginia countryside. Next, to "live" in the Historic Downtown District, Comstock called attention to its BLVD | Historic Herndon apartments that will "marry classical elegance with a bohemian twist." Finally, "discover" focused on Comstock's revitalization of the historic downtown, bringing "heart, life and opportunity back to the neighborhood."

"We are excited about this development and what it means for Herndon's downtown. We appreciate the degree to which Comstock has incorporated Herndon's heritage in their development plans and look forward to a revitalized downtown that offers 21st century residential and commercial amenities in a way that is uniquely 'Herndon,'" said Town Manager Bill Ashton. The project is planned to include 273 luxury residences, 18,000+ square feet of boutique, restaurant and cafe space, an 8-level parking garage, three public plazas with outdoor seating and dedicated art.

No date is set to close on the deal. Comstock did not reply to requests for comment.