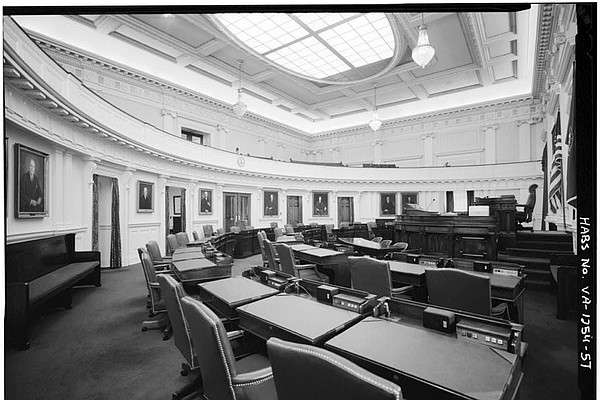 When Democrats won both chambers of the General Assembly in November, hopes were high that the new majorities in the House and Senate would move forward with a progressive agenda that had been rejected when Republicans were in power. Labor groups were particularly excited about the prospect of passing a $15 minimum wage, collective bargaining for public employees and a requirement that all employers offer five paid sick days. But the General Assembly session ended this week without fully accomplishing these goals.

Standing in the way: a trio of conservative Democratic senators from Fairfax County.

Majority Leader Dick Saslaw (D-35) who blocked collective bargaining for state workers. Sen. Dave Marsden (D-37) blocked a $15 minimum wage by 2025. And Sen. Chap Petersen (D-35) blocked guaranteed paid sick days. Saslaw, Marsden and Petersen are some of the most senior Democrats in the Senate, and their approach to labor issues offers a stark contrast with the approach taken by the more progressive and younger members of the House of Delegates.

"The three of them, although from the political party and region of Virginia from which much of the populist energy has come in recent times, are also from an earlier era of Virginia Democratic Party politics when Virginia Democrats were by and large more business friendly,” said Quentin Kidd, political science professor at Christopher Newport University. "We not only have partisan differences on things like collective bargaining and minimum wage, but we also have generational differences within the Democratic Party itself.”

RAISING THE MINIMUM WAGE was one of the major agenda items for Democrats when they arrived in Richmond for the opening of the General Assembly session in January. When the bill was considered in the Senate Commerce and Labor Committee, Marsden unsuccessfully tried to create a regional variation. When the bill made its way to the Senate floor, Marsden held out for regional variation, and enough conservative Democrats joined him that the bill was only able to pass by delaying $15 an hour until 2023 in Hampton Roads.

The House held out for $15 an hour across Virginia, although the Senate version retained that regional variation. That sent the bill into a secret closed-door conference committee, where lawmakers hashed out a deal shielded from public view. They emerged with a plan that would raise the minimum wage to $12 an hour by 2023 then pause to study how a regional minimum wage might work. It also carved out exemptions for young people and farmworkers.

“Virginians across the Commonwealth work hard and deserve a raise,” said Anna Scholl, executive director of Progress Virginia. “We will keep working to make sure that all families in our communities, regardless of what kind of work they do, make $15 an hour and have the ability to raise their families with dignity.”

COLLECTIVE BARGAINING for public employees was another top-tier issue for Democrats as they arrived in Richmond this year for the General Assembly session. Virginia is one of only three states that prohibits public service workers the right to negotiate together for fair wages and safe working conditions. Del. Elizabeth Guzman (D-31) passed a bill out of the House that allowed collective bargaining for local government employees and state employees. Her bill also gave workers the ability to decide to unionize rather than the leaders of the local government.

“My bill will empower workers like teachers, firefighters, social workers, police officers to have a seat at the table during the decision making process,” said Guzman. “And it is my belief that if we are going to take care of a group of public employees, we have to take care of all of them, and that include state employees. They also deserve to have a voice at the table and advocate for better resources, better equipment and better salaries.”

Across the hall in the Senate, Saslaw was working on a much more conservative approach. His bill allowed collective bargaining for employees of local governments but not state workers. His bill also took the decision to unionize out of the hands of workers and put it instead into the hands of the local government leaders. If members of a county board of supervisors decide they don’t want to deal with a union, they’ll be able to block their workers from collective bargaining under Saslaw’s version of the bill. When asked by a reporter what’s wrong with allowing state workers to unionize, Saslaw said it wasn’t going to happen.

Part of the reason the Senate didn’t have the votes was that Saslaw didn’t support it, which is why it ended in a closed-door conference committee where a final version of the bill was crafted in secret. Saslaw’s version of the bill is what emerged from that secret process, and that’s the version now on the governor’s desk.

PAID SICK DAYS have suddenly become a major political issue because of the coronavirus. But even as lawmakers arrived in Richmond earlier this year, many progressive Democrats were hopeful about a bill that would have required employers to offer five paid sick days. The Virginia Interfaith Center for Public Policy initially wanted this to apply to businesses that had five employees or more. Gov. Ralph Northam suggested that the mandate should apply to businesses that have 25 employees or more, a threshold advocates worried would exempt 90 percent of businesses in Virginia.

“Employers who are employing 25 individuals or more are already offering five paid sick days to their employees,” said Sen. Barbara Favola (D-31). "So we’re perplexed because we don’t believe that many employers would be affected by the governor’s bill.”

Lawmakers started by compromising at mandating five paid sick days for businesses that have 15 employees or more. Northam declined to answer questions about whether he would amend the bill to exclude 90 percent of businesses in Virginia. But he never got the chance. In the closing hours of the General Assembly session, Petersen killed the bill by making a case on the Senate floor that part-time workers didn’t deserve paid sick days.

The bill died in an unrecorded vote to delay the bill, which had the effect of killing the bill for the year because lawmakers were on the verge of closing the session and leaving town.